The Del Mar Racetrack has been home to the Fair, the horse races, and a plethora of public and private events in between. Last year, however, marked something new, a festival where culture intersected with music – the first of its kind for San Diego since the city discontinued its Street Scene series nearly a decade ago. San Diego, at its core, boasts an eclectic mix of musical and lifestyle orientations as a result of being one of America's best towns for tourism (and of course, weather), so naturally a massive festival event would have to do the same. Cue, KAABOO: a coastal three-day “ultimate MIX-perience” event, with the biggest names in music, comedy, art, and cuisine all aligning in one place, at one time, for one unforgettable weekend. With KAABOO's overwhelming return and subsequent Year One recognition, the whole city has had its eyes and ears on what's to come for 2016. And, with the big name's across the board attached to this year's line-up, Year Two is shaping up to be even more extraordinary than the first.

One thing is for sure, the 2nd Annual KAABOO MIX-perience will be one for the record books

Set to kickoff at 11am on Friday, September 16th and stretching until midnight Sunday, the 2nd Annual KAABOO Festival will have attendees on their feet from the moment the doors open until the final closing acts of Day Three. This is due to the festival accommodating over 80 bands on the bill, with genres stretching from reggae to hip hop to EDM to pop to contemporary to good 'ol rock-and-roll; no matter your musical preference, get ready to be entertained. Headliners for the fest include Aerosmith, Jack Johnson, Jimmy Buffett & the Coral Reefer Band, Fall Out Boy, among SO MANY MORE famed performers! Concert-goers will really have to plan out their day accordingly before get through the gates in order to not miss their favorites. Here's a little help: if you are a Top 40 or EDM fan, you'll probably want to highlight on your daily itinerary The Chainsmokers, Gavin Degraw, Flo Rida, Steve Aoki, Matoma, Rac, and more. More of a country/folk fan? Shakey Graves, G. Love & the Special Sauce, Jason Isbell, Shovels and Rope, and Nancarrow are right up your alley. Reggae lovers have Rebelution, Steel Pulse, The Green, Karl Denson's Tiny Universe, and the 'dirty reggae' amalgamation from LA, The Aggrolites. There's stuff for the alternative rock crowd, like Cold War Kids, Grouplove, Capital Cities, Citizen Cope, Rooney, St. Paul and the Broken Bones, The Struts, etc. For those who live and breathe hip hop, Cypress Hill will be joining the party, alongside Ludacris and DJ Snoopadelic (Snoop Dogg). Love the 90s? Well… you might just be in for the holiest of all holies of a weekend. Let's just spout a few names for nostalgia's sake: Lenny Kravitz, Third Eye Blind, Goo Goo Dolls, Blues Traveler, Collective Soul, Chris Isaak, Sugar Ray, Shaun Colvin and Steve Earle, Gin Blossoms, Macy Gray… freaking out yet?? 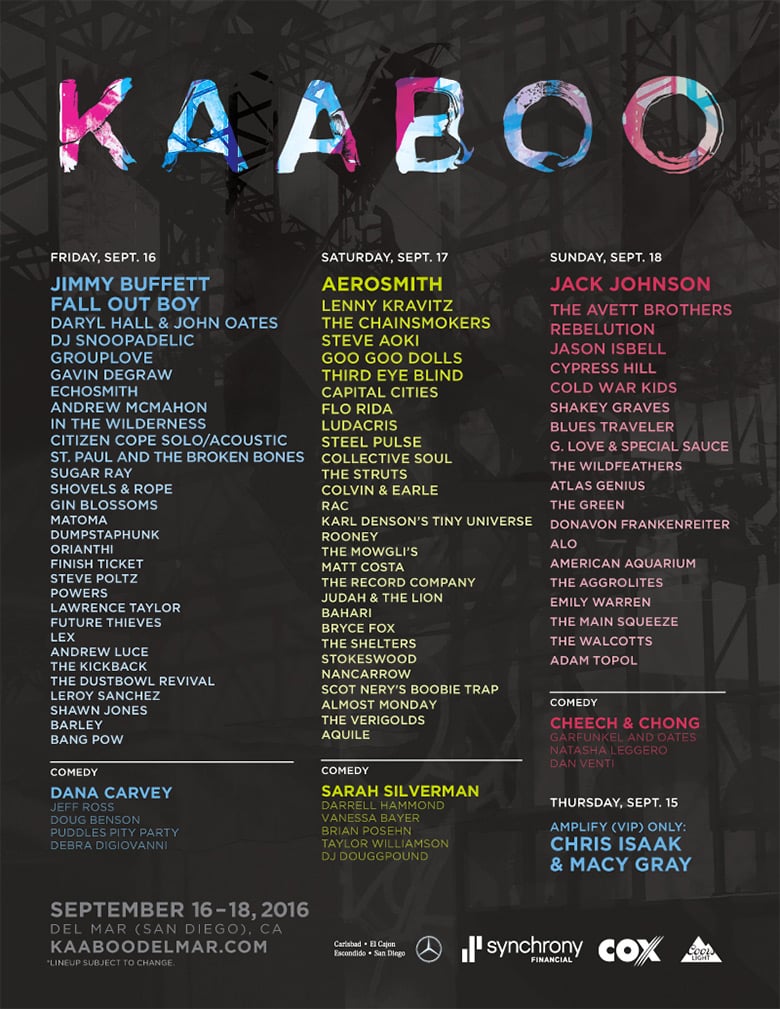 That's only the MUSIC. As in KAABOO's inaugural year, 2016 is bringing only the A-list comedians to the table. Hold on to your seat: this year's comedic acts will feature Dana Carvey, Sarah Silverman, Cheech & Chong, Darrell Hammond, Jeff Ross, Vanessa Bayer, Doug Benson, Garfunkel & Oates, Natasha Leggero, Brian Posehn, and more. Foodies at the festival will be able to view their idols in person, with renowned chefs Richard Blais, Brian Malarkey, Josiah Citrin, Marcel Vigneron, Timothy Hollingsworth, and several others in the mix. And, last but not least, event attendees can witness live art (and possibly even take some home) from the copious list of advertised artists, including Askew One, Caratoes, Vans the Omega, Lauren Ys, among others.

One thing is for sure, the 2nd Annual KAABOO MIX-perience will be one for the record books. Even though in its fledgling stages as a second-year festival, KAABOO has already surpassed the level of other longtime San Diego cultural events – nearly rivaling Coachella! For those interested in attending, this festival is right around the corner and WILL sell out, so make sure to secure your tickets now! For more information or tickets (including VIP!), visit www.kaaboodelmar.com.