Five years ago, in 2010, a small festival took place in Monterey, California over Memorial Day Weekend where bands played to an audience of friends, family, other musicians and local fans. Today, after tens of thousands of festival-goers all over the country flocked to Monterey's fairgrounds and enjoyed yet another three-day musical extravaganza, it's hard to believe that the California Roots movement began so quaint and minuscule in the not so distant past. After expanding from two days to three in the fourth year, the Cali Roots festival is now a staple of summertime, an indescribable experience of love and music incomparable to any other.

This year was different, however. It seemed that extra downtime was allotted in between acts to enjoy your surroundings; vegan and vegetarian food options were provided and coconut water was abundant. Even the quality of the onsite espresso stand was impressive and the good-heartedness of the security staff was more than outstanding! You couldn't ask for a bigger bang for your buck.

And when it comes to a larger than life line-up, California Roots always takes home the blue ribbon. Every day of the 6th Annual was a blend of roots, ska, folk, hip hop and dancehall, allowing no one in the massive audience to be exempt. Day One brought Florida's Leilani Wolfgramm front and center to kickoff the weekend followed by Dustin Thomas, Trevor Hall, Blue King Brown, Sun Dried Vibes, Nahko and Medicine for the People, Jon Wayne and the Pain, Dilated Peoples, The Supervillains, a partial performance by John Butler Trio (who gets detention after school for excessive tardiness), Giant Panda Guerilla Dub Squad, Steel Pulse and, of course, SOJA headlining. 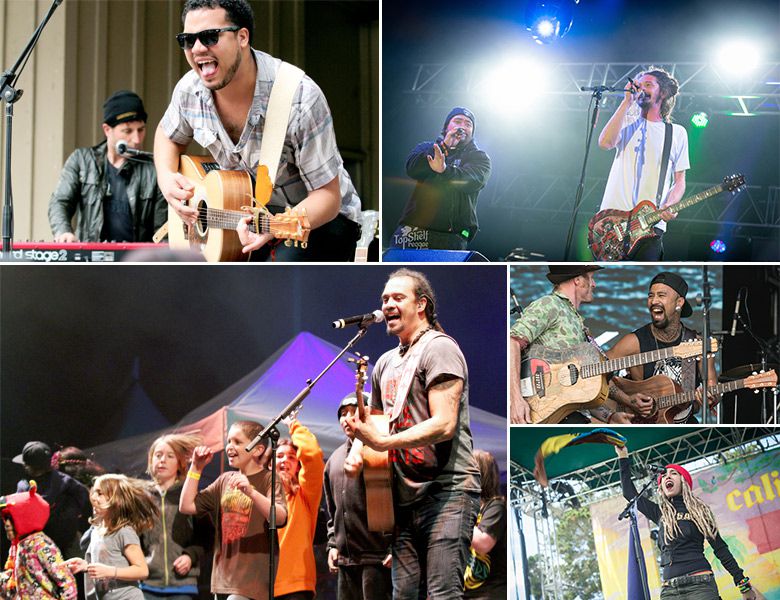 …when it comes to a larger than life line-up, California Roots always takes home the blue ribbon.

Day Two was by far my favorite. Beebs and Her Money Makers was scheduled first and, being a ska kid since junior high, these guys not only rocked my ska socks off, but have tremendous potential! It's also not every day that you wake up and see a girl with long purple hair in a blue and yellow tutu skank with a unicorn, a dreaded cuckoo bird and a hotdog with a rasta-colored mohawk. Believe it, it happened. The crowd, now fully awake, joined KBong for morning smiles on the Original Stage right before Mike Love inaugurated Day Two at the Bowl. John Brown's Body, Arise Roots, Collie Buddz, Soul Majestic and Chronixx upheld the energy, leading to a solid and touching performance by the Ethan Tucker Band. Despite occupying the smallest stage, Tucker utilized its intimacy to his advantage, prompting Michael Franti to hop onstage and whip out an unexpected freestyle rap to roaring applause. Tucker's vibrant performance stood as an atmospheric turning point – one for the better.

The amplified enthusiasm persisted during the Dirty Heads and sent the crowd sprinting back to the Original Stage for a truly original event: The Skints, in the midst of their premier American tour from the UK, were about to play live – an event witnessed by few. In most bands' cases, the recorded version of their work surpasses the quality of their live sound; in the case of The Skints, the exact opposite is true. Not to say that their debut album FM is bad! On the contrary, it's great, but watching The Skints live is no less than mesmerizing. If I was a cartoon character, my eyes would have popped out of my skull as my jaw plummeted to the ground, like Jim Carrey in “The Mask”. No understatement – you just can't take your eyes off them.

Michael Franti was up next, and right when you believed your mind was officially blown, Franti stole the show. Franti is not just an artist, he's a genuine, interactive person wanting to meet and greet everyone in the audience. For several songs, he was immersed somewhere within the gargantuan crowd – shaking hands, giving hugs and grasping palms. At one point, he had climbed a tree! When Franti finally reunited with his band, what seemed like a hundred giant beach balls descended upon the audience, inspiring a sort of anarchic volleyball game. Just when you thought it was safe to leave the stage to head towards the headlining Roots, Franti pulled you back in: he invited all children of the festival – from toddlers to middle-schoolers – to join him onstage in singing “Say Hey (I Love You)”.  Parents throughout the concert sent their children crowdsurfing to the front from every direction, and witnessing how ecstatic the youngsters were to not only be acknowledged as actual festival-goers, but to literally be part of it onstage was almost tearjerking! Mobbing to the Bowl, a simultaneous thought rippled across the assembly: how can The Roots possibly top that? Well… turns out they couldn't. Michael Franti set the bar beyond reach. 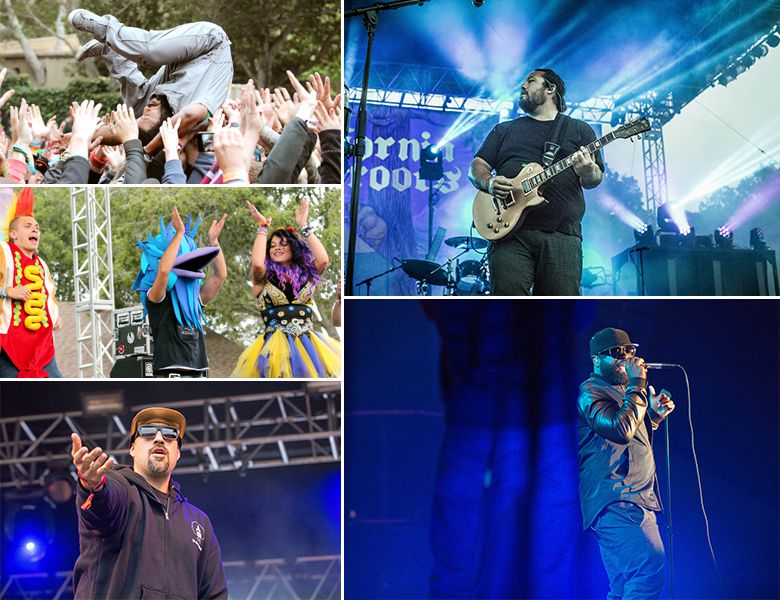 Day Three came all too soon, finishing the weekend off strong with a full day of big names: Pacific Dub, Animo, Fortunate Youth, Common Kings, Fear Nuttin Band, Tribal Seeds, Cas Haley, G Love and Special Sauce, E.N. Young, Cypress Hill, Fishbone, Iration and lastly, the reigning kings of the California reggae scene, Slightly Stoopid. After three days of such togetherness, such enthusiasm, such warmth and positivity, it's a cold hard reality that the 7th Annual California Roots remains so far in the future at this point in time. For how fluid this year's festival came and went, co-producers Jeff Monser and Dan Sheehan must feel a giant sense of accomplishment and pride. Until next year, the 6th Annual California Roots Festival stands as the quintessential reggae experience, paramount and unsurmountable to its competitors. And for those who can't wait for a whole year to pass, the California Roots team has the Dry Diggings and the California Roots Carolina Sessions festivals coming this fall.