We had the opportunity to sit down and touch base with Southern California based musician Timothy H, who weighed in on touring with SoCal’s own P.O.D., reggae music, and just music in general. Timothy also goes into detail about his yet to be released album with Fortunate Youth and other classified guest appearances.

You're recording, you're touring. You're all over the place, but based out of San Diego. For people in the reggae scene that have not heard your music so far, can you describe your eclectic sound?

Well, it’s SoCal style, for sure. I've been kind of more of a SoCal rock kind of guy, with punk rock a lot. My whole reggae thing is something that's San Diego-based, vibe-based… I mean, this place is an amazing muse, you know? San Diego radiates reggae. To not be influenced by reggae while you live, you’d have to be deaf.

And, you're kind of a sub-genre of it…

For someone who hasn't heard my music, it’s straight-up SoCal style – San Diego style. It includes pretty much everything, but my next album's going to be a reggae album. We're doing everything in the means of reggae: we're trying to put down the huge stacks of amps and distortion pedals, and put away the electronic DJ stuff.

What does San Diego style means to me? It means a lot! It means a vibe. It means a kind, welcoming friendship. It means more than the music… it's the people here. Everything is like real laid back, and the musicians here are super open to work with other people. I've been in LA and the LA vibe was, you know, nothing like it. Everyone talks about LA, but the San Diego vibe is super laid back and an irie time. It's just a friendly kind of music. This place has shaped my sound. It's changed my life – from surfing to watching the sunset every day. I think that all goes into the music.

Now, San Diego band P.O.D. has toured with your guys. You toured with them in the fall, and you're currently on tour with them right now?

Yes, I'm back out with P.O.D. You know, San Diego has always kind of been in the shadow of LA, or the ‘little brother’ of LA. And to have a big rock-n-roll band come out of San Diego and actually make a movement…  and it’s the same thing with what I talked about with my music, P.O.D. is so positive! Their music is so positive. They're Grammy-nominated people, but they're just nice people too. They actually put me on their new album, it's called The Awakening. I met them back in like 2000; I think their album Satellite was just blowing up around then. Nothing's really changed, they've just been awesome guys. And, they kind of just are perfect examples of how San Diego musicians are and San Diego is. Everyone's like ‘hey, you wanna come and jam with us? You want to come and roll with us in the studio?’ P.O.D. is rock-n-roll. For lack of better terms, they're so kickass. They're stage diving and there's moshpits. That's something that San Diego hasn't had – a big rock-n-roll band blow up. P.O.D. has definitely done that. They made a whole SoCal culture, which is pretty bold.

Speaking of Grammy-nominated bands and SoCal bands, you've recently had time in the studio recording your new album with Fortunate Youth. You said your album's going to be more reggae in style. Is it going be reflective of what Fortunate Youth brings to their albums?

Yes, yes. So, my debut album was very diverse. There's punk rock songs, there's hip hop songs on there. And after my debut, we wanted to do more of a genre album for the next three albums. And, ideally, why not do the first one reggae? Everyone always thought I was a reggae band, anyways. Fortunate Youth full-on throws down the SoCal sound the best. They have been on my radar, and I remember the show that I did with them maybe two years ago or so. Back then, I told myself, ‘when we do a reggae album, we're grabbing some of these players, for sure, because they are something special.’ Fast-forward two years later, look at them now. They're just blowing up. All independent musicians and independent labels, and they did all their own footwork. They're amazing. So working with them, it was like working with your best friends. There was a lot of laughter going on. The whole band cruised by and if they weren't playing, we were dancing!  If we weren’t dancing, someone was probably rolling something up. It was something special. It was pretty cool. They’re just really good kind-hearted people. And they jam, you know? They're the jam band, just like reggae jam bands are killing it right now. So… wait, what was the question again? 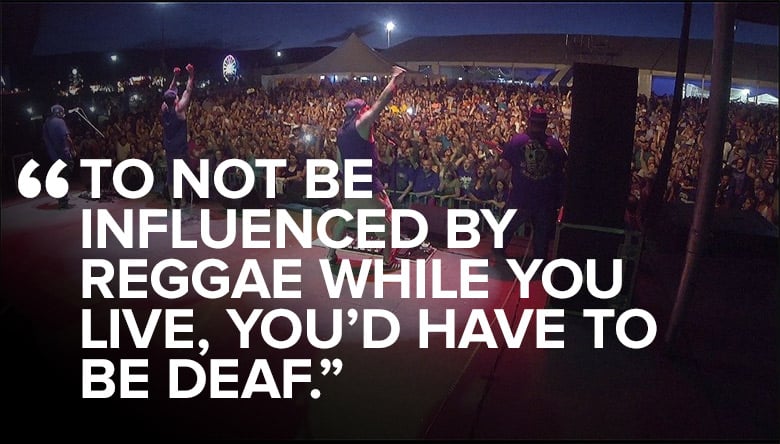 [Laughing] How was your experience with Fortune Youth in the studio, and how your new album might reflect a more California reggae sound?

Yeah, yeah. Exactly, those guys are all reggae flavors. We spent hours showing each other music that we like. You know, ‘check this out, check this one, or check this out!!’ But, it seemed like they would always come back to some old reggae artist that they knew I had to hear. This album's going to be reggae, and I'm smart enough to know to do a good reggae album, I have to get some good reggae players on there. So, Fortunate Youth is at the top of their game right now. And I can't wait for you to share what they put on my album.

Yes, yes. We have a single coming out on 4/20. Which is a good day for me. It's my birthday, and a special day for, you know, the stoner community in general, hence our independent record label: Born On 4/20 Records. And yeah, I'm born on 4/20. My parents had everything to do with it.

Born on 4/20 Records, is that what the album's going to be released under?

That's what the album will be released under. And the album title is gonna be called Pacific Time. The title reflects everything, everything that happens in Pacific Time. The single will be coming out on 4/20, and then an album release will happen in the summer. Hopefully early summer. It all depends on my tour schedule with P.O.D.

And speaking of the tour schedule, how’s tour going?

This tour goes out for a month, and it started January 23rd in Cape Coral, Florida. We actually play a show here in February at The House of Blues. We'll play peekaboo with California. We come back for a minute, we go back out for another month. Let me see, I got the dates right here. Yeah, so what I heard in Spring we will come back for a month and then find out what's going on for summer. The show on February 16th is a pretty special one for me, I've never done it. You know, the P.O.D. guys have done it all… I think that’s another reason why they like me being out there on tours because they get a kick out of watching me go through first-time things. But, February 16th, we're at the Whiskey in Hollywood.

That’s exciting! You have quite a year ahead, with the tours with P.O.D. and your album release!

I'm excited for everything. Music in general. I'm excited for just the whole music movement in 2016. Everything's getting more into the artist's hands. Everything is good. It just seems like it's getting easier for artists to get their music out there. And to see a major act like P.O.D. and go out with them on tour, learning everything from them from the business to just warming up before you play. I'm excited about everything. I'm not going to lie.

Are you going to have your own headlining tour once you drop your album?

Yes. I'm going to have my own headlining tour. It's not going to be as extravagant as P.O.D.'s, but I love it all. You could throw me in a $2 million tour bus, or we can go in your Toyota Sienna if you want. I'll roll and play music for everyone. I've done it all. So yeah, I’m going to do one, and California's the place the play. I remember doing two-week tours just in California and I was like, ‘I can just keep doing laps of this! This is pretty nice.’ Every place in California is a paradise. I love it. So yeah, I'm looking to do something in the summer. We're probably going to do a three-week run. We'd like to go as far as the Midwest, but if we're just on the west coast and maybe Colorado or so, I'll be really happy about that.

It's all about spreading the sound, right? Well thank you so much, Timothy. Do you have anything else that you'd like to put out to your fans?

I think other than I've got, you know, the Fortunate Youth boys, I've got some P.O.D. on the album, but I'm going to have some other artists on this album that you will have to stay tuned for. Look out for some other big reggae artists on it. I went back to like some older influences, like Elroy Wilson and Sugar Minott. I've put some dancehall on there. But at the same time, I'm really in love with this new age reggae or newer reggae. What do they call the newer stuff?

California reggae… that's what they're calling it?

I mean, that's what my current understanding is of it.

Is it really? That's amazing. I am in love with that title, for sure. So, you know, there's newer reggae that I know some of the older people hate on, but I am completely influenced by the newer reggae. I love it. I mean Fortunate Youth is the poster children of it and, dude, they jam! How could you not like Slightly Stoopid? This album I'm going to have both old school and new. I'm gonna have some bangers on there. The banging beats in the clubs, you know. I see what that does… It gets stuff bangin'. It gets people rockin'. So, look for a couple of songs like that. The trick was trying to stay off my distortion pedal and keep it reggae.

Awesome, well we can't with to hear it!*