Every year for the past 10 years, a solo hip hop artist known as The Grouch does a string of holiday-themed shows for his fans over the month of December – typically alongside his fellow Living Legend cohort, Eligh. That's right, 2016 marks the 10th Annual How The Grouch Stole Christmas Tour! Even though this particular show isn't necessarily a reggae-lover's cup of Christmas tea, The Grouch and Eligh have performed together at dozens of reggae festivals over recent years, so you've got to give it up to them for maintaining a multilateral musical persona! And, while we're on the subject, hip hop and reggae are more closely related than you think: the two genres have played off each other throughout musical history to morph into what they are today. Fun fact. Considering the bridge between hip hop and reggae is growing shorter every day, The Grouch and Eligh are two names to know, and How The Grouch Stole Christmas is the place to be when the tour hits your town! Direct support over the past decade can be attributed to the cream of the crop of hip hop acts, including Cunninglynguists, Brother Ali, Zion I, and more; this year, however, Grouch and Eligh fans are getting an extra, super special Christmas present. Drum roll please… 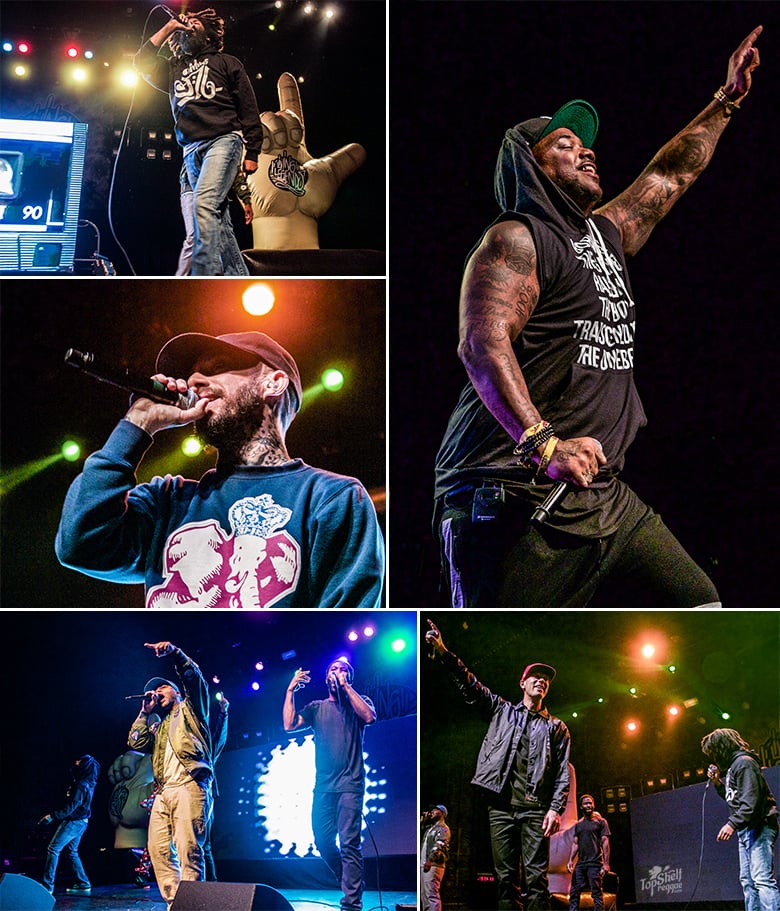 Grouch and Eligh fans are getting an extra, super special Christmas present

The ENTIRE EIGHT original members of the Living Legends are reuniting for this one tour only! For those that don't know the history behind the Livings Legends, the LA-based underground hip hop group was originally birthed from the Mystik Journeymen, a hip hop duo consisting of current Living Legend members Sunspot Jonz and Luckyiam. (The former was known as BFAP and the latter PSC back then, but that's neither here nor there.) Moving on to 1995 – Mystik Journeymen met The Grouch. As one Grouch song goes “1996 was the Hall of Game”, when The Grouch and Mystik Journeymen aligned with the 3 Melancholy Gypsies (Eligh, Scarub, and Murs), thus forming the base Living Legends members. Bicasso, Aesop, and Arata came along soon thereafter, and the rest is hip hop history… until 2012 when Murs and The Grouch left the group to pursue solo careers. Therefore, this sequence of December shows marks the first time there has been a reunion for the group in four years (and forlorn Living Legends fans everywhere rejoice)! Backed by DJ Fresh, and coupled with direct support from Evidence (of Dilated Peoples), this Grouch tour is one you don't want to miss.

I was lucky enough to be able to attend the San Diego show, show number three in the thirteen-show rundown. The Observatory Theater in North Park was packed to the brim with avid Living Legends, Grouch, Eligh, and Murs fans, making it almost impossible to meander through the venue. The stage had inflatable hands in the shape of L's on it, with a giant screen in the middle that rotated between the Living Legends logo and the 2016 show poster. You can feel the giddiness of people around you as they stood patient with anticipation. The lights went down, the first lyrics were rapped into offstage mics, and then there they were in all their holiday glory: Murs, Eligh, The Grouch, Scarub, Bicasso, Aesop, Luckyiam, and Sunspot Jonz, all adorning ugly Christmas sweaters or holiday onesie pajamas. They ran through hit after hit, and even pulled out some of their solo songs throughout the set. Whether they were dragging a couple dozen roses onstage, or having DJ Fresh come out wrapped around a human-sized boombox, the show was EPIC. Even though it was a bit nostalgic (to say the least), witnessing the whole crew having fun together onstage again really promoted the true meaning of Christmas. Leaving the venue with red and green Grouch and Living Legends lids, I felt the spirit of holidays a whole lot more than I did mere hours before.

And, the tour isn't over! Catch the tail end of the 10th Annual How The Grouch Stole Christmas Tour through December 14th. For more information, visit www.therealgrouch.com.