KAABOO has turned into quite a franchise for 2019, following a successful sold out KAABOO Cayman in February and with an inaugural KAABOO Texas lingering in the near future at the Dallas Cowboys AT&T Stadium this May. These sister fests wouldn't have been conceived without KAABOO taking place four festive and favored years at San Diego's Del Mar Fairgrounds, each packing unforgettable memories and sold out crowds. Now that KAABOO Del Mar is in its fifth year, branching out is finally possible… and the rest of the nation gives thanks to that! KAABOO is quickly taking over the world and fans of the fest can't wait to see what new locations 2020 may bring to light.

… you cannot outdo KAABOO. It's the most impressive party of the year. Period.

In the meantime, OG KAABOO fans have waited since the conclusion of KAABOO Del Mar 4 to see who will be attached to the 5th Annual this September 13th-15th, 2019. Many sprung for early bird passes, all of which sold out accordingly. What was revealed today may have shocked some, but most see the lineup for what it is — a perfectly-balanced work of pure festival genius. Sure, headliners are hard to beat year over year; KAABOO 3 boasted Tom Petty's fourth last performance before his unexpected passing! That's a pretty high pedastal to uphold. Plus, more and more festivals keep sprouting up every year, all trying to undercut each other's performance artists. The competition is steep, to say the least. All that in mind, true KAABOO-ers know it's not about the lineup, it's about the experience. The 'MIX-perience', as KAABOO puts it. With legendary acts from all musical genres coming together in between live art installations, A-grade comedians, tasty top chefs and all the amenities you could possibly imagine, you cannot outdo KAABOO. It's the most impressive party of the year. Period.

So, millenials, if you're not pleased with the lineup — your loss! Sure, Biebs and Bey aren't headlining… but GRAMMY-winners Dave Matthews Band, Kings Of Leon and Mumford and Sons are. Snooze fest, you accuse? Have you seen Kings Of Leon perform?? Their set is on fire. How about when Black Eyed Peas gets it started reciting decades of mega hits after deejays Cheat Codes and Cash Cash start midday dance parties? Y'all are crazy if you even think about sleeping on KAABOO 5. If you're still indignant that Coachella does it better, the FOMO is bound to smack you hard once KAABOO weekend comes along and all your friends are there. Because, let's face it, Year 5 is as diverse as it gets (in true KAABOO fashion). Fans of reggae can soak in world music vibes by Xavier Rudd, Cali reggae-rock anthems from Sublime With Rome and the classic roots of Toots and the Maytals. Hip hop lovers get a Snoop Dogg/Wu-Tang mashup as well as Top 40 hits from Boyz II Men bringing the early 90s back. Speaking of 90s nostalgia, Sheryl Crow, Blind Melon and Squeeze will cover most your guilty pleasure playlist this year.

Want to take it even further back? Reminesce in the 80s with Duran Duran, The Cult, The Bangles, REO Speedwagon and Mix Master Mike making an appearance sans his Beastie Boy brothers. Want more recent stuff to jam to? Rock of the 2000s is represented quite a bit between Lifehouse, Switchfoot, Silversun Pickups and Plain White T's. Hey there Delilah, indeed. And, despite what haters on the interwebs are saying, modern alt-rock music will be more than present and accounted for with performances by The Revivalists, ONEREPUBLIC, Alec Benjamin, Keuning, Suckerbox and so many more. Even country lovers get Maren Morris. 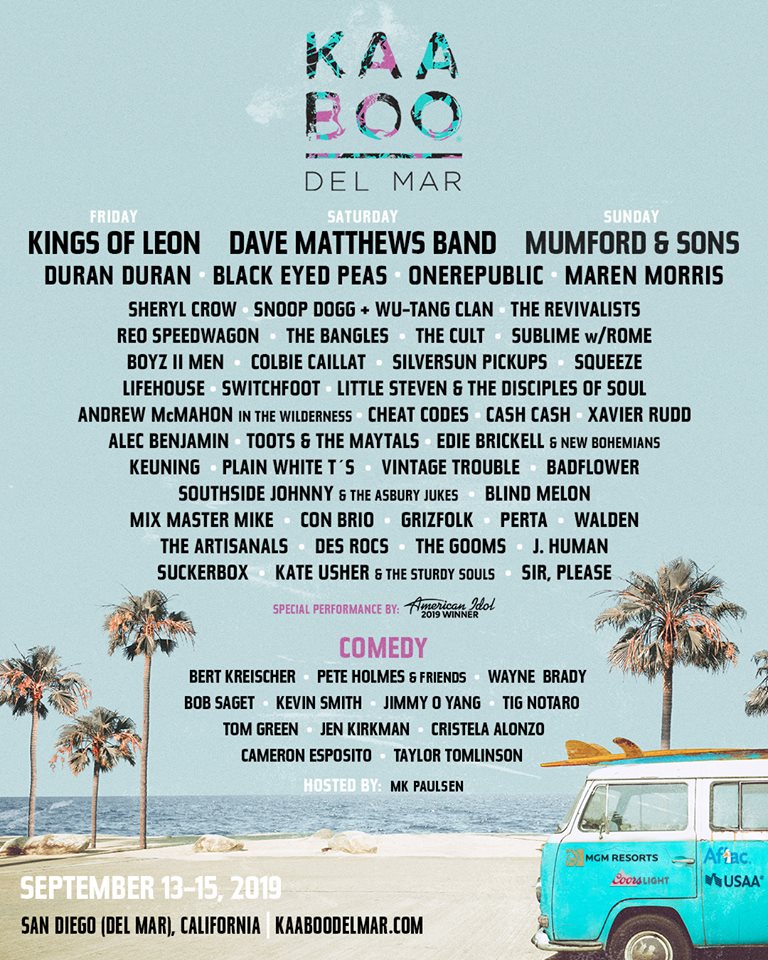 With so much more to be revealed, including the culinary and BASK lineups, it's time to get your tickets before KAABOO 5 sells out! And, like every year preceding it, it's going to. For more information or to get your passes now, visit the links below or www.kaaboodelmar.com.