It’s been awhile since this reviewer has been to an all-ages punk rock show which featured reggae as a direct influence to its punk roots and hip-hop acceptance. Gone are the days when this mix was considered fresh, new, and born of Southern California. Instead, this punk rock holiday show appeared to be a giant party with old school loyals.

Kottonmouth Kings have been around since the days when Sublime’s music really took off – notably, after the unfortunate death of Bradley Nowell. With a strong following, and an annual charity show in their hometown area, the Kottonmouth Kings brought the extra holiday surprise to their very large, loyal gathering.

Special Blend, a band from Huntington Beach started the night on the main stage. Though there was another area to enjoy music, the main stage featured such acts as Imperial Soundclash, Pilot Touhill, Marlon Asher, C4Mula, and the beloved Kottonmouth Kings, of course, for which fans appeared to be waiting on the whole night. 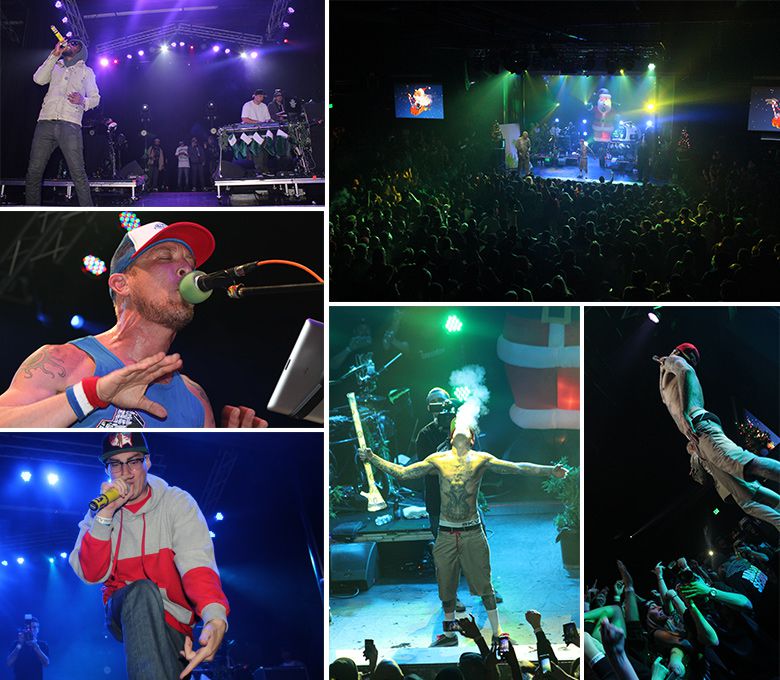 Imperial Soundclash was fun and had a lot of support. As the night progressed, it was interesting to see that all these so-called bands (except for Special Blend) merely supplied vocals to a deejay spinning beats. C4Mula made the night more interesting after bringing a bass onstage and providing smooth flows, or hip-hop vocals. Marlon Asher was a true reggae provider, though again, he simply provided vocals to beats.

Though we were unable to get a set list, it appeared that Kottonmouth Kings played a lot of fan favorites. Notable songs included a lot of bass, such as that in “Hold It In,” a lot of talk on smoke, and such songs as “Party Monsters” and “Peace Pipe.” There was also a lot of mosh pitting and crowd surfing, a true punk show signature. The most notable part of the night was when Holiday Helpers came out to throw presents to the crowd. Let’s just say a lot of fans went home happy from this end-of-the-year Jingle Bowls session.