Slightly Stoopid's Summer Session Tour featured Stephen Marley, NOFX, Cypress Hill, and G. Love & Special Sauce. At the Sleeptrain Amphitheater in Chula Vista, California, instead of Cypress Hill and G. Love, fans got The Expanders from Los Angeles, California. Not that Top Shelf Reggae can complain since we are fond of this roots-inspired band. The mix with Stephen Marley, NOFX, and Slightly Stoopid only added to a fun, reggae-rock punk show.

The mix with Stephen Marley, NOFX, and Slightly Stoopid only added to a fun, reggae-rock punk show.

The evening started around 5:30PM at a sizable venue with what we were told was a sold out show, but found out later from an announcement that all attendees were invited to fill up the inner seating area. Though the invitation was well-taken, there was a pretty good-sized crowd for Slightly Stoopid anyhow. After all, this band was in their hometown, and San Diegans are known for showing their support.

The crowd was still filling up the outdoor venue for The Expanders, but we sure heard that sweet reggae melody as we made our way to our seats. Yes, we are familiar with the three-part harmony in The Expanders’ classic-sounding reggae, but San Diego may not know just how sweet it is. This may have been due to all those NOFX supporters expecting punk rock music, but this concert happened to include a theme of roots reggae meets punk rock night. 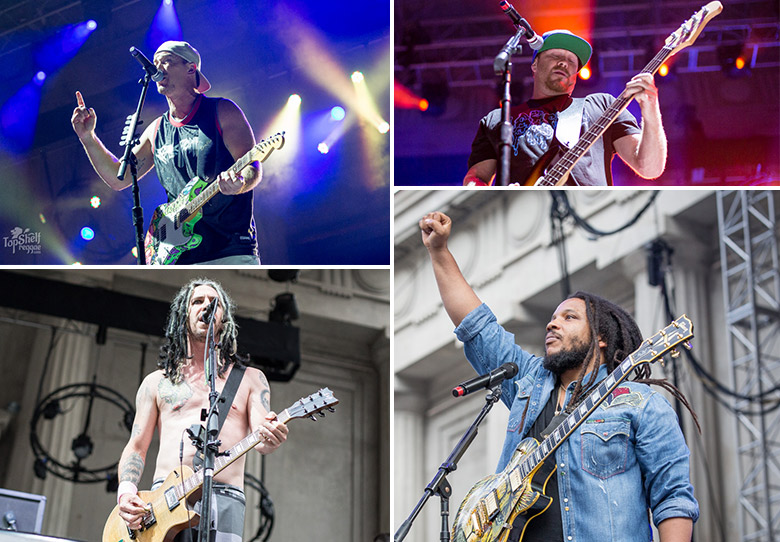 Who better to bring a roots reggae vibe to this summer tour than the Stephen Marley family. Holding a strong presence similar to his father, Marley’s vibes were “JAH” Righteous with his sons and daughter also making a strong presence on stage too. We heard covers of his father’s music, including “Could You Be Loved” and “Buffalo Soldier,” and saw that Rastafarian flag wave loud and proud. The best treat, though, was witnessing Marley’s children sing modern reggae songs.

NOFX came on afterward, and really, how were they going to perform after Stephen Marley? By bringing the punk rock vibes to this show, of course! NOFX did not disappoint. Not only have we not heard punk rock music like that in recent times, but their set included a mix of slow and steady music too. Fat Mike talked about adding on to the previous reggae vibes, but their classic punk vibes was all their many, many supporters cared about that night. Great job, guys!

It appears this is what the majority of the crowd was waiting to hear once the night sky set in. The crowd was pumped with ol’ school music from the likes of Dr. Dre prior to the boys hitting the stage. Then came an instrumental intro’ before Kyle and Miles brought their infamous sound. Playing such songs as “This Joint” and a special rendition of “2am” mixed with a collaboration song featuring Marlon Asher, the boys and their powerful horn section not only brought some dub reggae rock, but  also their ol’ school punk rock music too. They also happened to cover Nirvana’s “Territorial Pissings.” The mix of music defined the night, and it seems the majority of the crowd enjoyed this punky rock reggae concert.

Full gallery of the Berkeley, CA show can be seen here.