For the past quarter-century, the San Diego Music Awards [SDMA's] have showcased the top performers in the city, handing awards to the most deserved of San Diegan musicians – both local and nationally renowned. Past winners have often been Jason Mraz, Slightly Stoopid, Tribal Seeds, Switchfoot and several other popular names across the musical categories although bands lower on the proverbial totem pole get nominated right beside them, equally worthy of praise.

This year, Top Shelf Reggae had the privilege to infiltrate said award show and witness the frenzy first-hand. Hosted by Humphrey's By the Bay in Shelter Island, each attendee walked past a sea of news vans in the parking lot and into a mob of music industry mongers, silhouetted against the moonlight. Although the backdrop of the bay was tranquil, the foreground was anything but. Milling about were strangers and acquaintances alike – all flashing black business cards and spouting previously rehearsed spiels of notable accomplishments. It was a Royal Shmooze-a-palooza: shake hands, nod heads, get contacts, take note on how to one-up the competition for next year, refill your drink, golf clap for the winner.

Being able to witness an eclectic variety of the best bands in town, all in one sitting, is a powerful feeling in and of itself.

Seating seemed to be a free-for-all, which made it easy to position yourself anywhere you wanted to around the venue. If only the sound were louder so you could hear what the announcers were saying. Of the presenters were several beautiful faces from San Diego news channels, such as Allie Wagner and Kristen Cusato of KUSI-TV; Cusato went above and beyond in a news report on Deering Banjos, the recipient of this year's 'San Diego Music Industry Award'. The SDMA's ongoing relationship with the local media is obviously a healthy one.

Awards were getting handed out like hot cakes – one right after the other – and reggae winners were high in number. The first award of the night was 'Best World Music', including nominees who ranged from world to Latin to ska to roots to contemporary reggae to rock. Very broad category, that 'World Music' is… The winner happened to be more towards the classic definition of the category: Todo Mundo, a band who self-proclaimes as a combination of “Spanish Rumba, Reggae, Brazilian, Balkan and Middle Eastern styles”, also the 2014 SDMA award recipient for the same category. Congratulations, Todo Mundo, it was hilarious that you were missing in action and try to locate yourselves before next year. 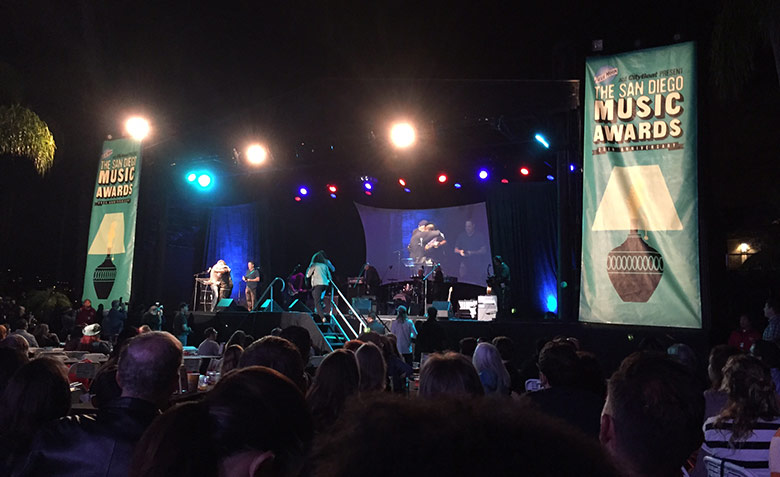 Stoopid of course took some statues, scoring 'Album of the Year' for their latest Meanwhile… Back at the Lab as well as 'Best Music Video' for their hit single “The Prophet” which not only features exclusive jam footage of the band over the years, but is dedicated to the late, yet legendary Sublime frontman Bradley Nowell. B-Side Players won 'Best World Music Album' for Dos Generaciones and attendees got to sample the award-winning LP with a live performance. Other acts gracing the stage were Karl Denson's Tiny Universe, Louis XIV, Big Mountain, Cody Lovaas, Berkley Hart Selis Twang, Gregory Page and his accompanists, and Peter Sprague – receiver of the 'Lifetime Achievement Award'. Being able to witness an eclectic variety of the best bands in town, all in one sitting, is a powerful feeling in and of itself.

Just as sudden as it began, the curtains closed and the auditorium emptied. Prior to the final announcement, the SDMA crew paid tribute to the musicians lost within the past year, similar to the Grammy's and other televised award shows. For this is the San Diego Grammy's: recognition given to the most meritorious of musicians within the wonderful city that we call home. And what an artistically gifted community it shall always be.