Working three jobs around the clock in sunny San Diego, I had only one entity to look forward to between March and (presumably) September when I finally might have a day off: my three-day jam-packed press ticket to the glorious and all-wonderful Memorial Day weekend of the 5th Annual Cali Roots in Monterey, California. I set the necessary 4AM alarm for my 6 o’clock flight to San Francisco – due to working the night before – and had it all planned to arrive at the campgrounds before the cathartic first day announcement that the show has begun! All went well until an uncontrollable act of nature intervened.

First, the plane was broken – a six-hour delay there. Then, the rental car had an approximate three-hour wait line; a cancellation later, I had a new reservation for triple the price and was on the road to the festival… right in time for traffic. My 10AM arrival time in Monterey turned into a 7:45PM exasperated entrance, knowing that I have officially missed almost all of the first day.

This aside, I heard truly awe-inspiring things about Day One. The topper of the list was SOJA’s Trevor Young lighting up the stage with a burning guitar as a blatant tribute to Jimi Hendrix, who ignited his guitar for the history books decades prior on the same Bowl Stage in Monterey’s 1967 Pop Festival. I heard about other notable instances such as Steel Pulse stealing the show, J Boog making everyone dance, The Simpkin Project delivering entirely, Cisco Adler surprising with great stage presence, and the list winds all the way to the beginning of it all: when San Diego bands Reeform and The Stircrazies got everyone who traveled far and wide stoked to be there for the next three days straight. I will never travel United Airlines again for forcing me to miss such epic events.

Bitterness aside, I was on time and ready for the festivities of Day Two. Although mostly everyone I encountered claimed to be hungover, the Cali Roots crowd was rallying to the fullest capacity throughout the day’s stocked line-up: Aer, Katastro, Dewey and the Peoples, Zion I, Cas Haley, Iration, Alborosie, Ojo De Buey, Tatanka, True Press, Nahko and Medicine for the People, Saritah, Los Rakas, Papafish, and the main men of the night – Ziggy Marley and Rebelution. As I was running back and forth from stage to stage, I have to comment on how intimidating the amount people packed into the Bowl was – you couldn’t possibly fit any more bodies in that stadium. This festival has truly grown over five years. I was present at the second and third annuals, but back then, it was mainly artists and friends playing to each other; this is definitely not the case any longer. Negating its current massive size, walking around the grounds felt less like a festival and more like a musician “Where’s Waldo”: in between the concert-going fans walked a stage performer virtually every two seconds. The day brought with it amazing acts – too many to note individually – with Ziggy Marley’s mellow vibe counterbalancing Rebelution’s rocking conclusion of the night. Being Rebelution’s third headlining at California Roots, they were dubbed the veterans of Day Two. 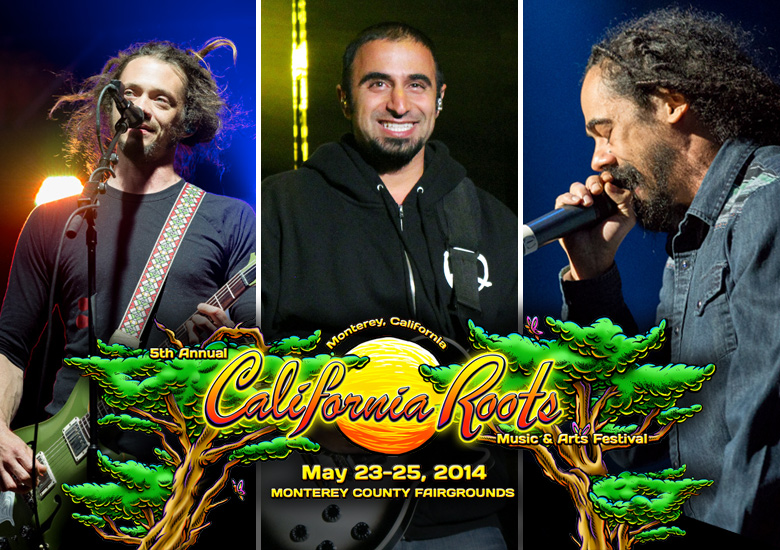 Just when you thought the weekend couldn’t get any better, Day Three came along. The camping crowd rose to action a third and final time, knowing that this was all they had left to hold onto until next year. Perusing the grounds before the energetic Hirie kicked the music into high gear, one could find participatory yoga occurring in the grass and artists already prepping fresh canvases. This was the definition of Cali Roots; this was the reggae culture; this was family. Day Three was the epitome of everything good in people, besides being a line-up for the ages.  Following the aforementioned Hirie, there was Krooked Treez, Iriefuse, Black Salt Tone, The Movement, The Green, Groundation, Pepper, Clear Conscience, Skunk Movement, Micah Brown, Gonzo and Beyond I Sight, New Kingston, 311, White Glove Service, and the finale of all finales, Damian “Jr. Gong” Marley. What a day. Yet, like all good things in life, the festival eventually had to come to an end. As people did their last shots at the bars and in the photobooths Sunday night, the crowd dispersed Monday morning back to the four corners of California, as well as the rest of the United States. Until next year – California Roots, you will be missed.